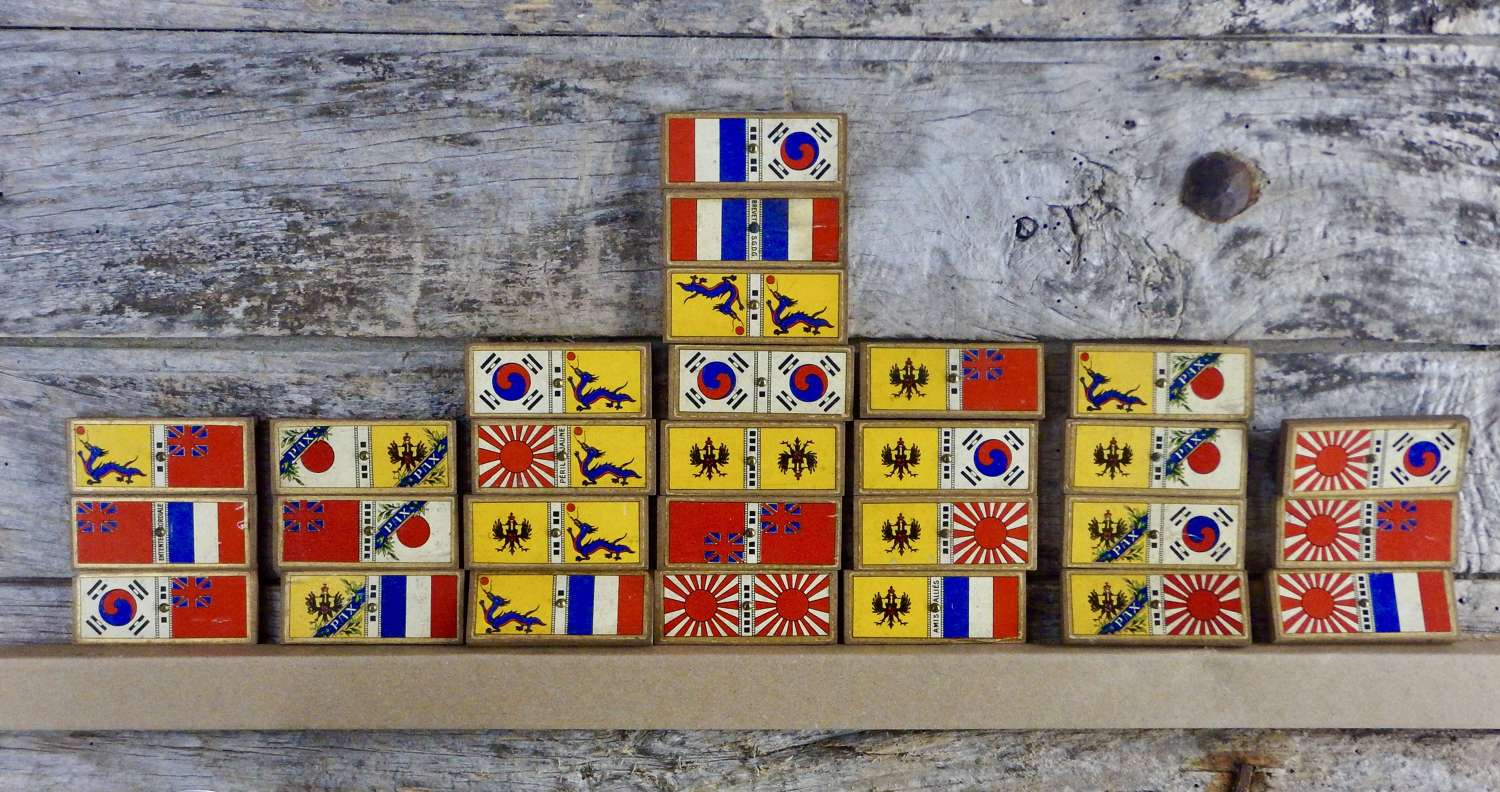 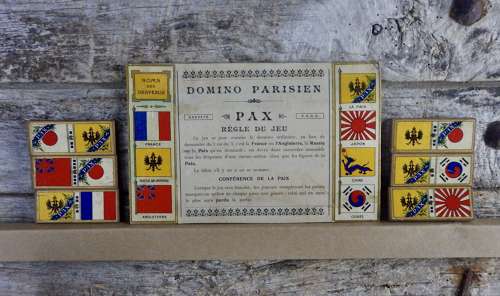 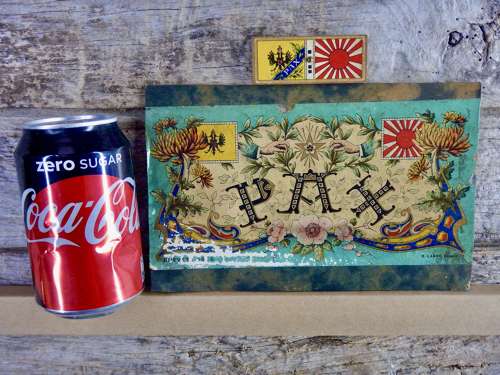 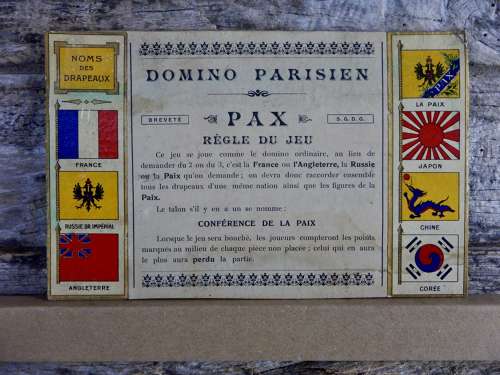 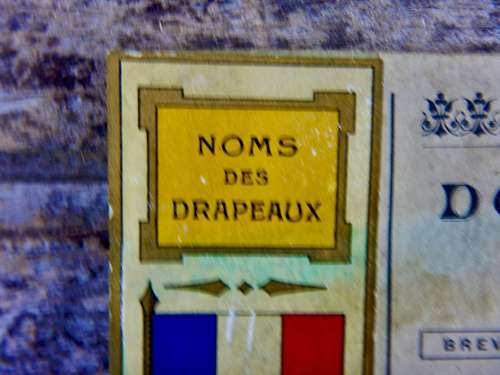 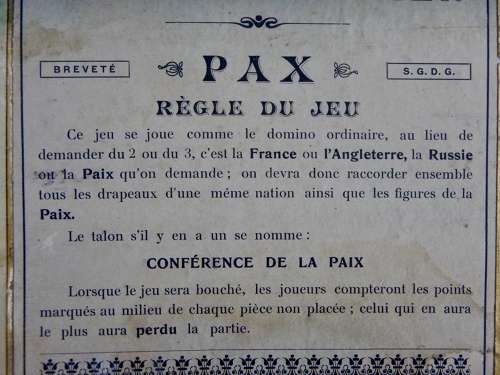 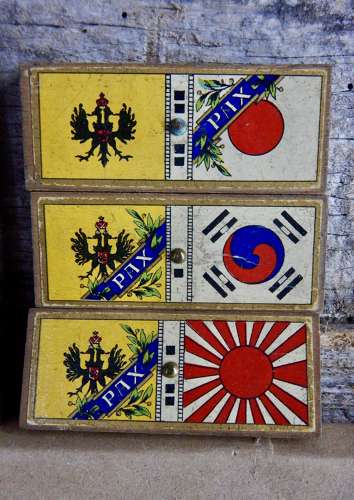 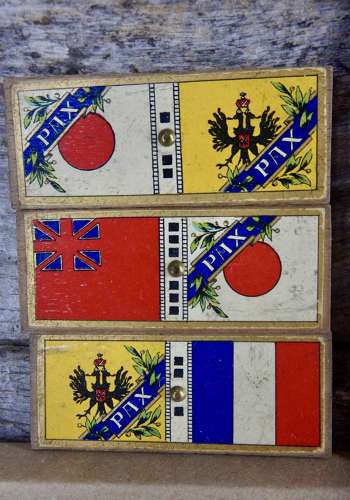 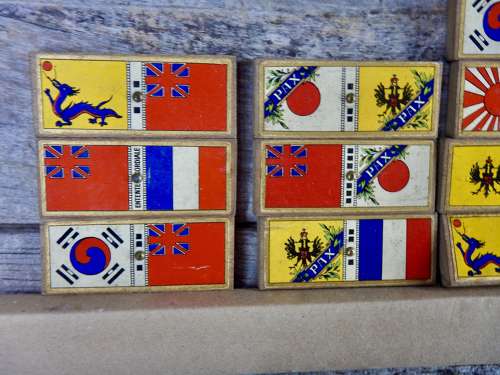 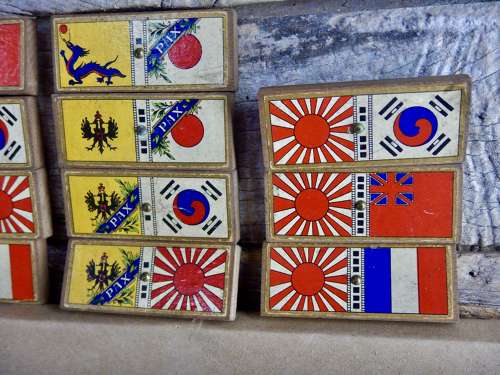 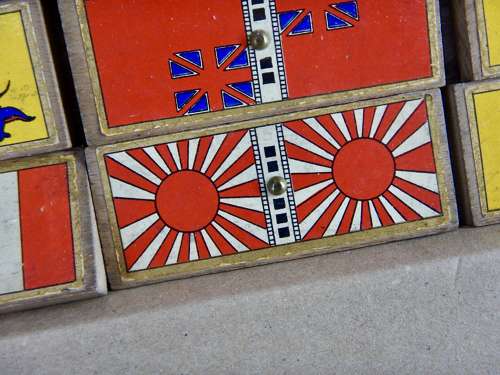 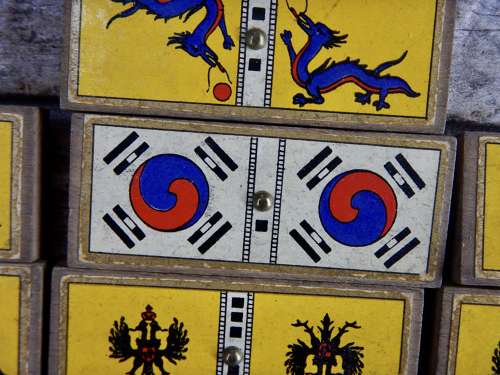 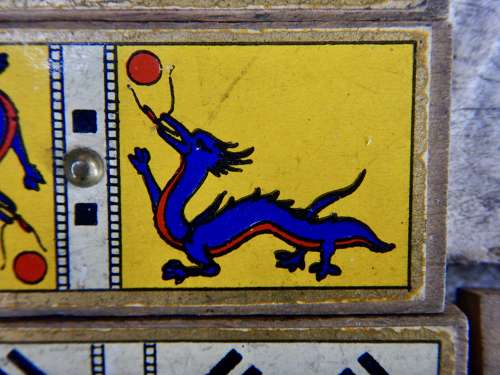 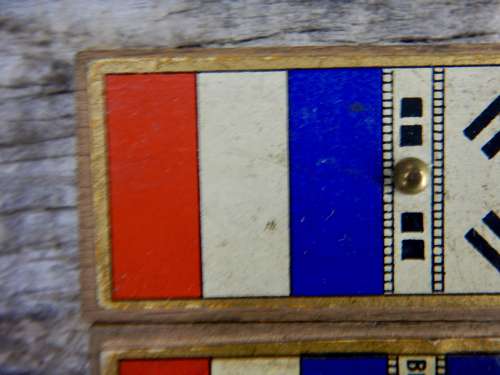 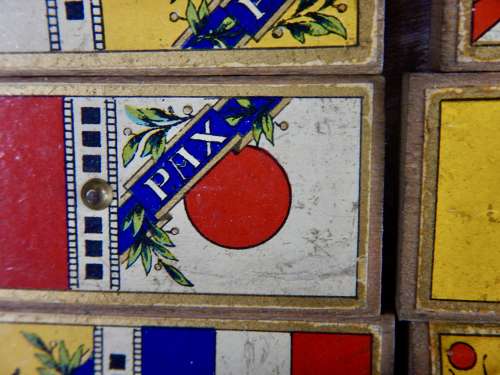 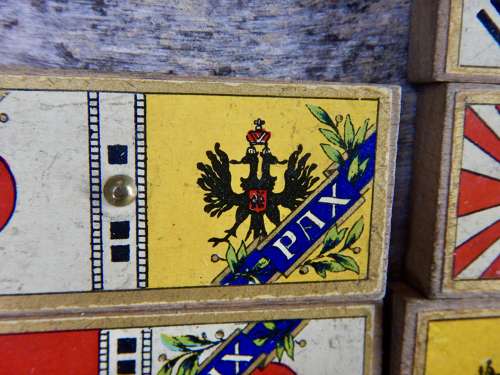 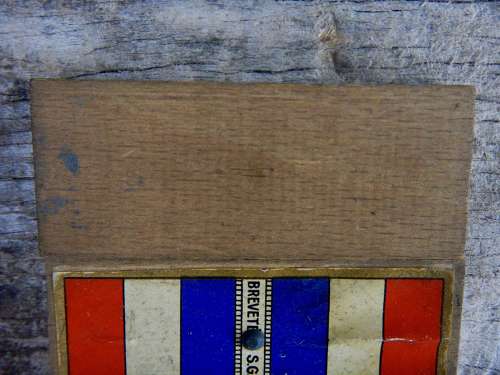 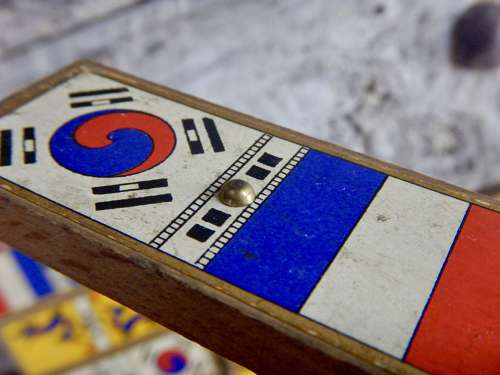 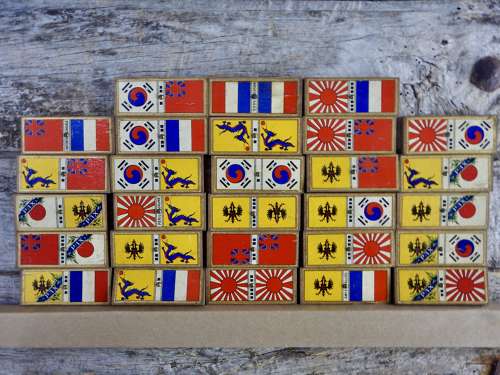 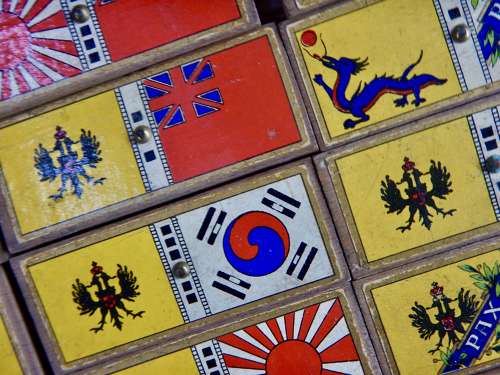 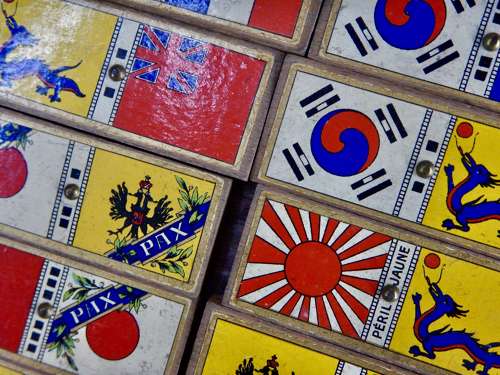 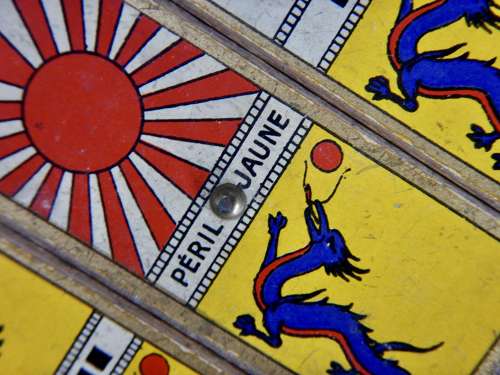 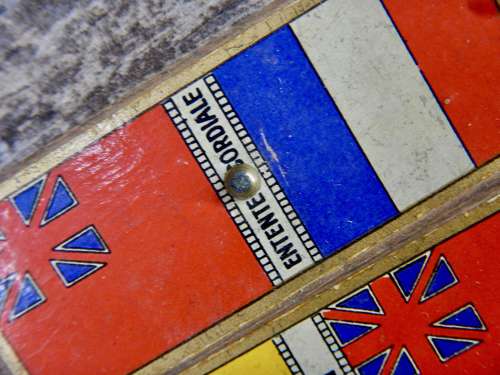 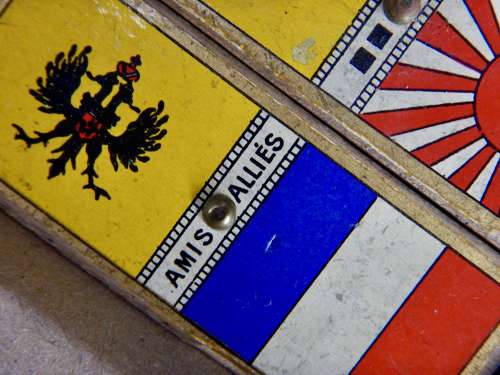 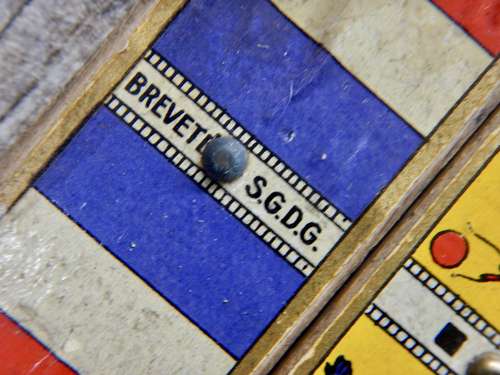 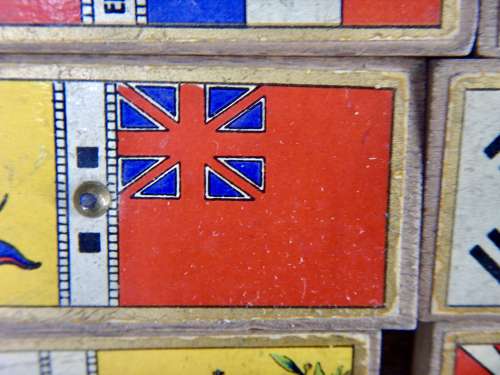 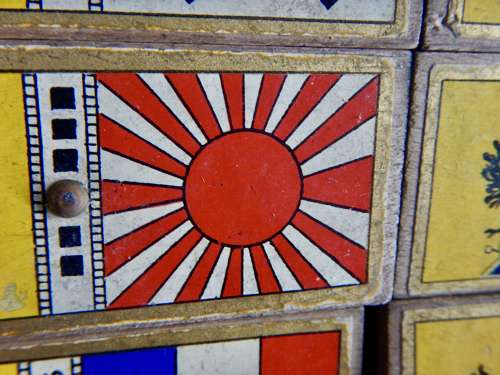 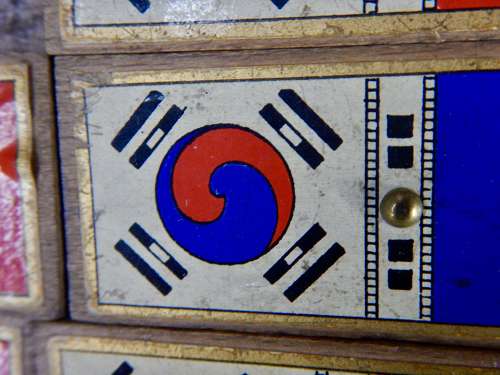 This is the most unusual set of Dominoes we have ever found. We purchased from a French gentleman who was selling the house contents of his deceased Grandfather, who had served in the French Military when he was young and became an avid collector of military memorabilia. Only a few of these sets of Dominoes were ever produced and they are in good condition - other than the box; unfortunately we only have "PAX" the lid, that you can see in the photos.

We believe they originate from around 1896 when there was an agreement between the countries  whose flags we see on the dominoes.

The dominoes are well made out of wood with a single brass pin in the centre to aid in shuffling. The hardwood base of each one is 2.6" / 70mm by 1.15" / 29mm and 0.3" / 8mm thick and they are decorated with a thin coloured paper transfer of the National flags of France, Imperial Russia, England, China, Japan and Korea.

The peace agreement was regarding the war between China, Korea and Japan and also involved the Russians as they were at the time building the Trans Siberian Railway. The agreement was sadly short-lived, as fighting restarted shortly into the 1900's.

On the inside of the "PAX" lid - which is beautifully designed on the outside - are the rules for the game that are in French that read :-
"Rules of the Game. This game is played like the ordinary domino, instead of asking for 2 or 3, it is France or England, Russia or Peace Flag that is asked for; we will therefore have to connect together all the flags of the same nation as the figures of Peace.
When the game is closed, the players will count the points scored in the middle of each unplaced piece. Whoever has the most will lose the game."

Although we have the lid of the original box the actual dominoes came to us in a cut-down card box that had been made to fit the set - a vintage green made-up cardboard box, that appears to have originally come from a Parisian Stationery store.

Your purchase will be carefully packed in recycled materials where possible and despatched via An Post.
***********The PRICE INCLUDES TRACKED INTERNATIONAL SHIPPING.**************